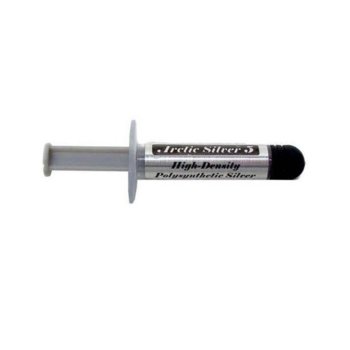 Controlled Triple-Phase Viscosity:
Arctic Silver 5 does not contain any silicone. The suspension fluid is a proprietary mixture of advanced polysynthetic oils that work together to provide three distinctive functional phases. As it comes from the syringe, Arctic Silver 5's consistency is engineered for easy application. During the CPU's initial use, the compound thins out to enhance the filling of the microscopic valleys and ensure the best physical contact between the heatsink and the CPU core. Then the compound thickens slightly over the next 50 to 200 hours of use to its final consistency designed for long-term stability. (This should not be confused with conventional phase change pads that are pre-attached to many heatsinks. Those pads melt each time they get hot then re-solidify when they cool. The viscosity changes that Arctic Silver 5 goes through are much more subtle and ultimately much more effective.)

Important Reminder:
Due to the unique shape and sizes of the particles in Arctic Silver 5's conductive matrix, it will take a up to 200 hours and several thermal cycles to achieve maximum particle to particle thermal conduction and for the heatsink to CPU interface to reach maximum conductivity. (This period will be longer in a system without a fan on the heatsink or with a low speed fan on the heatsink.) On systems measuring actual internal core temperatures via the CPU's internal diode, the measured temperature will often drop 2C to 5C over this "break-in" period. This break-in will occur during the normal use of the computer as long as the computer is turned off from time to time and the interface is allowed to cool to room temperature. Once the break-in is complete, the computer can be left on if desired.

Caution:
We do not recommend using Arctic Silver 5 on the older slot type Intel Xeon processors with large multiple square inch CPU to heatsink interfaces. The huge contact area and large gaps between the processor and the heatsink require a thermal pad or thick mesh-reinforced paste. Arctic Silver 5 can be used on socket type Xeons without a problem.