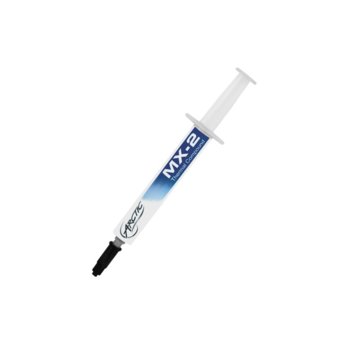 
Application:
CPU, GPU and other applications between power semiconductor components and heat sinks.

Safe to apply anywhere
Since the MX-2 does not contain any metal particles, there are no problems regarding electrical conductivity or capacitance. Unlike other silver and copper compounds, MX-2 ensures that contact to electrical traces, pins and leads cannot result in any damage.

Durability
With MX-2 no curing and no bleeding of the compound are possible. In contrast to other products, this compound does not show decreasing performance over time, does not need to be reapplied and has a durability of at least 8 years.