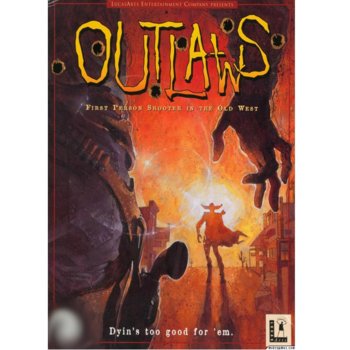 ОписаниеТехнически характеристики
In Outlaws, you don the duds and irons of the archetypal Avenging Loner who rides into town seeking to redress the wrongs committed by a railroad tycoon and his renegade thugs. Using both the 3D engine from the popular Dark Forces and Rebel Assualt II's INSANE engine, Outlaws combines all the elements of classic 1960s Leone-esque Westerns in a first-person shooter that is probably the first point-of-view crawler since Marathon with an actual, articulated plot.

You take the role of ex-marshal James Anderson, whose life is shattered by vicious desperados who murder his wife and kidnap his daughter, leading the determined hero on an avenging, unshaven kill spree through a prairie stronghold, a lethal sun-battered township with the unlikely name of Sanctuary, a clattering, swaying-car passenger train, and more. Inspired by such films as A Fistful of Dollars and other spaghetti westerns, Outlaws is a respectable step forward in the first-person shooter genre; even the gorgeous and gloomy Quake had only the lamest excuse for a plot. Not so with Outlaws, where in the middle of a tense back-room shoot-out the game will suddenly cut to an animated cinematic sequence which moves the story, and the motivations of the player, along.